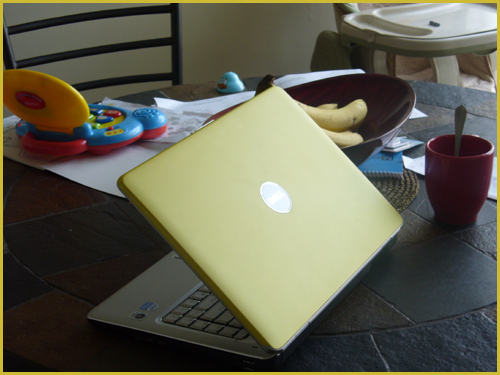 Well, here it is. Everything is better in yellow I think. (It’s even brighter than it looks in that picture – the light is hitting it oddly there.) But it is bigger than I thought it would be, and this track pad is really going to take some getting used to. And after writing on paper as long as my baby has been alive, I’m finding my creativity a little stifled on this thing. That will take some getting used to as well I suppose, but I think there will always be some charm to writing in a paper journal with a good old-fashioned pen.

Question #1 is can we keep grubby little blueberry-jam hands off of it? This is going to be a tough one because he really really wants to get it. There are no games on this computer, I’m telling him, which of course is not true since his games are on the internet. I know if I let him play a game on this thing even once, it’s all over.

Question #2 is can we find a functional and cute laptop bag that will also hold my various folders, journals, and a couple of books? I have looked at Target already, and there was nothing either cute, or big enough to fit a 17 laptop. I didn’t know I was getting a big one. Oops!

#3, not a question, or to do with the laptop at all, why do telemarketers need to call eight times during Dylan’s nap??? Do they have some agenda against me that they just want to wake him up.

#4, I found a way to rig open the lens cover on my camera. And a good thing too, since I can’t afford to buy yet another new camera. Yay!