on story webs: this is what my brain looks like

I’m tweeting all the time about my 23-or-something books in progress. This is to let you know that I’m totally not joking.

For a while I was talking about Leslie’s story, which I thought was going to be the next book out the door, but Leslie is being difficult, so now I think Leila and Corbin’s book will be next. If any of you remember, both Leslie and Corbin were secondary characters in Exactly Where They’d Fall. Leslie had a much smaller part as one of Drew’s cousins, and Corbin played a larger role in the story as Amelia’s friend. You even got to meet Leila in EWTF, though you’ll probably remember her as Corbin’s friend, “the earthy brunette.” Leila’s book, The Fish and the Bird, will come out next.

I’ve been meaning to append a note to the back of EWTF (there was a vague note about “though this is not a traditional series, you will see these characters again…), which will attempt to explain what I’m doing here. What I want to say is: these books are part of a complicated and sprawling web of interlinked stories, novellas, and novels, spanning forward and backwards in time, and flowing through several friendships, families, and romances. While each story is whole and can be read independently, they can also be read together as part of a larger web of human connections.

And if that doesn’t explain it well enough, then everything makes better sense with a diagram! 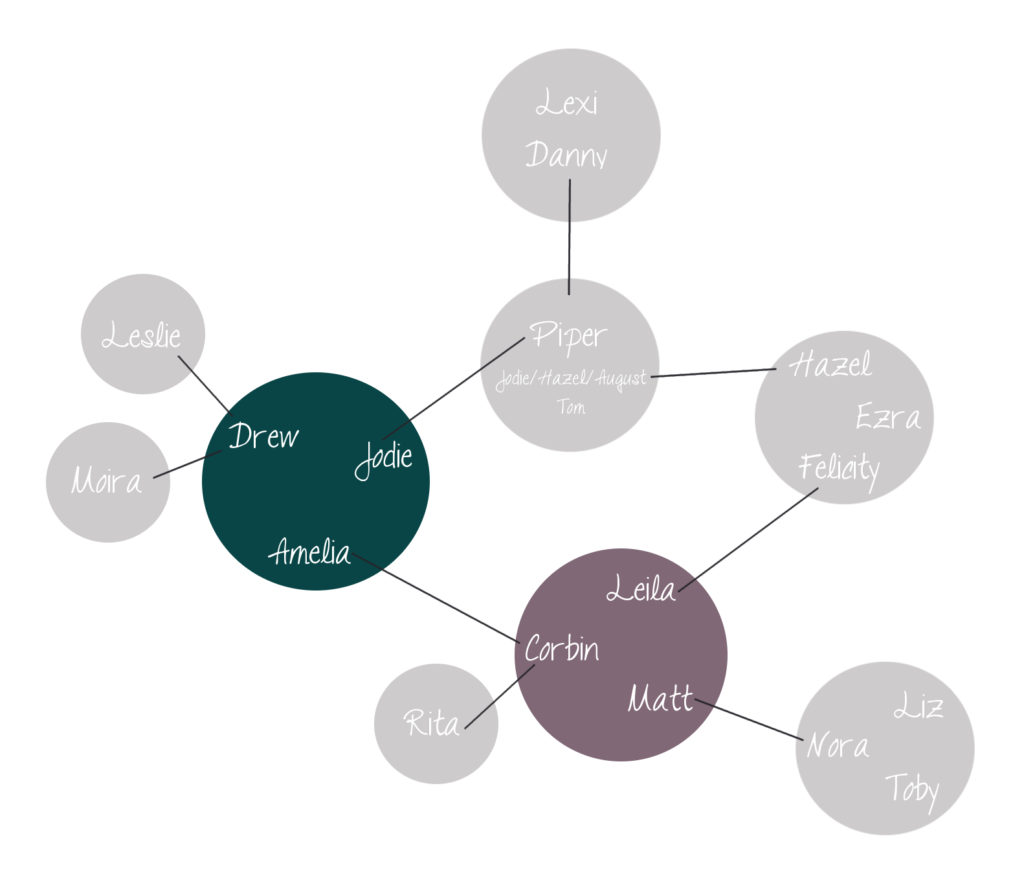 Each one of these circles represents a whole book. The green one is Exactly Where They’d Fall. The purple one is The Fish and the Bird. Each of the gray books is a work in progress. And each story, while linked, is completely independent of the others.

See? So think spin-offs rather than sequels. I do hope to complete each one of these books some day, although some are more certain than others. Most of these, I have at least a couple thousand words of notes, some completed scenes or lines of dialogue, and a pretty sure outline. For one or two of these, I’ve finished half the book already!

Looking at it now, I think it’s sort of fateful that I finished EWTF first, so that it could end up here in the middle like this, where all the other branches could start. It was certainly not the first of these that I began writing—that was Danny & Lexi’s book (which is still coming too… some day.) So I’ll admit I had no idea I was about to do this when I released EWTF first, but I am glad it worked out that way.

But I’m sharing this diagram because I know a lot of readers for EWTF have said they wanted “more” after the end. They felt like it was abrupt and sort of unfinished. Well, personally, I do consider that book finished and resolved as far as the core story is concerned, but perhaps people are feeling that they “want more” because there definitely is so much more to tell! More than could ever fit all into one book!

I’ve always enjoyed working with a large cast of characters, watching to see how they complement or conflict with each other, and especially how the outcome of one’s actions can affect another, sometimes spinning off a whole new story of its own. I hope you all find it interesting too!

So when asked, “Will there be a sequel?” My answer is, “Yes, kind of? But different.” There will be more, that I can promise.

I was never sure if I should have proclaimed that EWTF was the start of a series, because it’s different than most series. It isn’t linear. It doesn’t go, “Book 1, Book 2, Book 3, etc.” It doesn’t flow in chronological order. It’s bigger and more complicated than just a series. It rambles. It winds. But it is indeed the start of something.