why I love NaNoWriMo (even though I always lose) 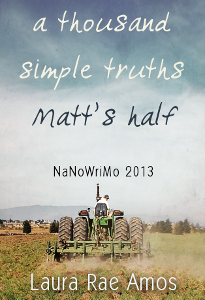 I sort of “fail” at NaNo every year. If you note my ticker, this year was like many past years. First week strong, second week loses steam. Third week it seems like half of the people around me have already “won” NaNoWriMo and the other half have given up, but I’m still plodding along, hopelessly behind, but stubbornly valiant. Then the fourth week, my husband’s birthday and Thanksgiving destroys the universe.

So I got 26,000 words accomplished this NaNo. But you see, for the whole previous month of October, I only wrote 5000 words. Do you see how I can’t possibly consider this a failure?

So I don’t think anyone who attempts NaNo and gets a good amount of work done can really fail.

The way I see NaNo, it doesn’t have to be about banging out 50,000 words of sludge. I didn’t get that many, but the days I did manage to make word count, they were not bad words. 1500-2000 words a day is not really a lot. I like to pretend it is, most days, but when I’m really, truly, actually working, it’s not a whole lot. The way I see it, winning NaNo is more about showing up to write every single day than it is writing a lot. Though some people win it that way too. There is no right or wrong way to NaNo.

Years later, I still attempt it every year. And I’d hardly call myself a newbie anymore. I never win it. I doubt I’ll ever win it. But I always try.

here are some reasons I love NaNo’ing:
– the NaNo box ticker. For real, I’d do it every year just for the ticker and all those pretty green boxes, lol!
– but also because everybody is watching each other’s tickers (somehow, that sounds dirty…), because it doesn’t count if nobody’s watching (really, lol!). More accountability. I’m trying to carry on this mentality into December when people stop watching, but we’ll see how I do.
– discipline training
– reminds me that finishing things is about showing up every day, whether I feel inspired or not.
– reminds me that a novel is built in many 500-word sessions, not all at once.
– reminds me that I CAN write 1500 words a day quite easily, and even 2000 words a day sometimes. Hell, I broke 3000 words in a day once this month. I can do it, I really can!
– I seem to write better when those around me are writing better too, and in November, everyone is writing a novel!
– productivity training, experimenting with session timing and scheduling to reach peak word output.
– being at the start of the school/work year, it makes for a good jump start after a lazy summer off, when you’ve forgotten good habits and basically how to write at all, lol!

So in November, I rewrote 26,000 words of Matt’s half of Truths (working title, which is probably going to change), which needed to be rewritten from scratch anyway. Because OMG I can’t even believe it was 2009/2010 when I drafted most of that, before I’d taken my novel through edits, and there was so much I learned in doing that. I feel like a completely different writer than I was four years ago.

If you’ve read Exactly Where They’d Fall, you won’t know about Matt, but you might remember his wife, Leila, Corbin’s friend. For most of that book, Amelia refers to her as “the earthy brunette”.

In Truths, both Matt and Leila share alternating POVs. Leila’s half is mostly finished, and after a few more weeks, Matt’s will be too.

Of course, there are so many months of editing ahead of me, but I’m so excited that in a few more weeks, I’ll have a whole finished draft of a novel again!

My NaNo page for this book, which has a bit of a blurb and excerpt.

Author: Laura
Filed Under: whatever
Tags: NaNoWriMo, the fish and the bird
I quit! And it feels so good!!!
ChickLitLove #2: romance in the bathroom