best zombie movie you will ever see 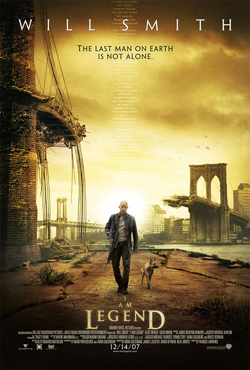 I don’t want to discount this movie by lumping it in with the other cheap zombie movies out there. (I’ve probably seen more zombie movies than any girl ever needs to see, thanks to hubby.) I mean this – I am Legend is THE BEST zombie movie you will EVER see.

The abandoned New York City (yes, they destroyed it again!) is fascinating to watch. Apparently they took real shots of the city and digitally removed the people from it.

Will Smith was surprisingly good in it, and as the only character for most of the movie, you’re really forced to notice that wow, the man really can act! Who knew? It’s been a while since I saw a movie where the whole theater was moved to applause at the end. It was that good!

There you go. My movie review in three paragraphs. Go see it! It’s definitely worth your $9.